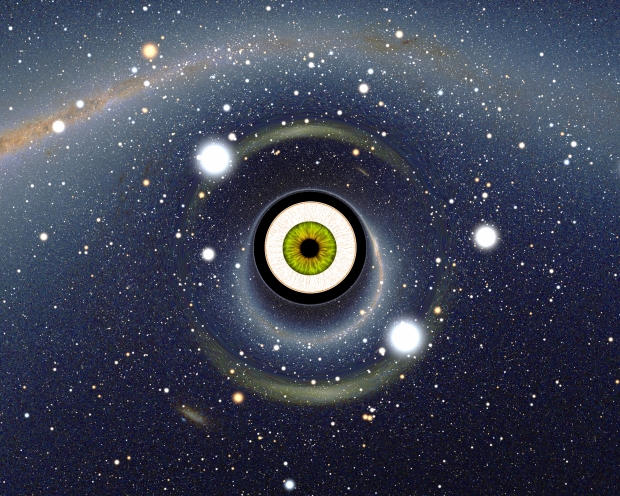 Man is like a galaxy; at the center there is the black-hole, the divine center, whose infinitude keeps the whole constitution together and functioning. There is also the rotational motion producing a centrifugal force that constantly throws the galaxy out of itself. Rotation of the galaxy is the sign of its life; it is the cause of its separation from the central source,  for what throws a center out of itself is its rotation. Thus, rotation symbolizes The Fall. In the absence of rotation the galaxy collapses onto itself, into its central black-hole. However, it is the destiny of a galaxy to collapse onto its own center, to return to the origin.

When water is boiling droplets are formed jumping up and down at the surface. Human life is like the life of these droplets that are momentarily separated from the source but are always on their way back to the source: They arise from the source and go back to the source. When the droplet falls back into the water it is no more a droplet; there are no droplets in the water; there is only water, an indivisible whole. The cause of the existence of droplets is the boiling which signifies the divine ecstasy necessitated by divine infinitude. It is the task of man to realize that though he experiences itself as an isolated droplet but his essence is water: The droplet is water but water is not the droplet. Droplet is water constrained in space and time; it is its name and form that separates the droplet from the water. Thus, separation is always only in name and form; its essence always remains water. The goal of spiritual life is to transcend the names and forms and to realize the essence. This realization is the necessary and sufficient condition for universal peace.

Realize your essence, whether by love and devotion or by sheer force of the intellect. Reflect on the fact that why we feel good when we love but feel uneasy when we hate! Isn’t it because what we love and what we hate is essentially a part of ourselves, the universal Self?! Love is always love of the Self; hatred is always hatred toward the Self. And above all, knowledge is always Self-knowledge.

When it comes to man whose essence is divine there is no gift better than true knowledge, for human knowledge, insofar as it is knowledge of absolute truth and not contingent fact, can unite all that there is. But at the same time there is nothing more dangerous than human ignorance, and this too is because of man’s divine essence, for man’s ignorance is in a sense god’s ignorance; nothing is more dangerous than an ignorant god since it has the totality under its spell. Imagine how destructive can a drunken god be?! Thus, if man’s knowledge can unite all that there is, man’s ignorance can destroy all that there is, and both in virtue of his divine essence. Realize that you are God in human disguise and throw away the petty desires and attachments; you are pure and infinite; nothing and no one can hurt you because there is nothing but you: You are all that there is.

[Please share the message if it resonates with you.]

18 thoughts on “You Are Pure and Infinite”