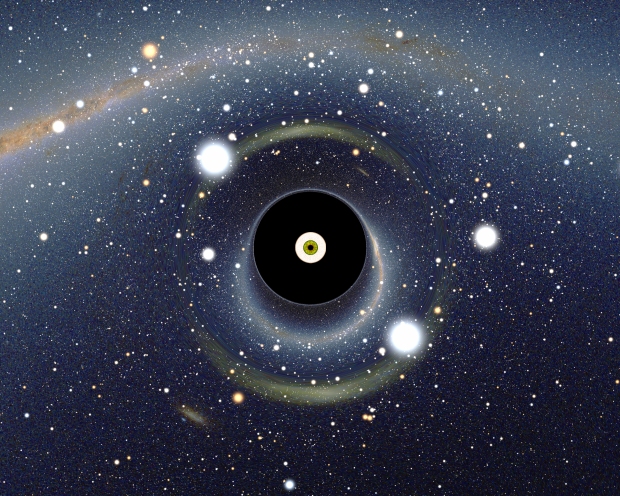 Deep deep inside me is sitting a naked man. Though I am in space He is not; though I am in time He is not. In this world I may be a man but in reality I am just His idea. I live this life and He lives me. The man you may know in this world is just His avatar, as the man of my dreams is only my avatar.

He does nothing except looking and He never blinks. The gaze of my eyes are His. You see Him when you look into my eyes, yet we are both slaughtered spirits suspended from His piercing gaze. He is the invisible man in whose shadow we live and know. Our breaths and our knowledge are indeed His.

From the depths of the abyss He is looking out a vacant look. He is detached from all this existence; all our worldly detachments are pale copies of His supreme detachment. He, that is Shankara, is the very essence of detachment.

Shankara, this infinite man staring into our world from the abyss, Shankara the sole dweller of the void, He is all that there is and I am nothing but His wavering shadow; we are all but the many images of Him in the shattered mirror of this world.

Shankara neither hates nor loves; He has no needs and desires; He is the perfect man and that is why He is mute. Shankara is the unsettling silence of bare existence. He is the inexpressible sense of Being that we feel in silence and solitude.

In the theater of this world there is only one audience, Shankara. But Shankara is not just the audience; He is also the actors and the actresses, the play, the beginning and the end, the first and the last, and He is the theater itself. This is all the play of Shankara. The mere sight of Him shatters all illusions, including those of the self and its hopes and aspirations. We are all Him, not so much because He is in all of us but because we are not and only He is.

My dear seeker, this Shankara better not be seen, for He is never anything that anyone can imagine before that uncaused  Encounter. Shankara’s gaze is the sharpest of all swords, for if His glance falls upon the soul It cuts through her existence and makes her naught. So, love Him as veiled, for He is not apart from what you imagine. But if you dare remove the veil, then be prepared to be devoured to the marrow, to see the real face of madness; He is one hungry mother.

The Way itself is a mystery; but there is a greater mystery awaiting you at the gates of His dimensionless abode: It is the secret of how to remove the veil behind which Shankara is sitting. This is The Secret of The Veil. Oh, my dear seeker, the secret is that you are the veil. It is always Shankara who does the unveiling; it is He who will cut you, the veil, into pieces in one glance when He so wishes.

My dear seeker, your seeking is the veil, for in seeking you constantly presume that you are apart from the sought, and worst of all that you are. What you seek you yourself put there in the world; how else would you know there is something to be sought?!

Your Fall is your forgetfulness. Forgetfulness of truth is the seed of belief and opinion. To know the truth one must be devoured by Shankara: Opinions are for man, for Atman knows only the Truth, the whole Truth, and nothing but the Truth. All that a human can think or imagine of Shankara are false, for Shankara is sitting behind all thought and imagination. The sage who knows this cannot say it, because he knows very well that to say is to transmit error: Truth is not something to be told but to be realized in silence and solitude.

8 thoughts on “The Secret of The Veil”